Impingement is a term that is often used. It derives from the English language and means something like ‘pinching’. Tendons run between the humeral head and the acromion, which are very important for the mobility and function of the shoulder. In addition, a bursa (bursa subacromialis) is found there, which acts as a sliding cushion between the bones and tendons. The genetic predispositions (anatomy) of the acromion and humerus, in other words, the composition and structure, are significant factors in determining whether impingement syndrome is promoted. For example, there are bony tubercles (tubercula majus and minus) on the humerus to which the tendons of the rotator cuff attach.

These can collide with the acromion during specific movements and cause pinching of the tendons and bursa. This space can become too narrow for various reasons (ossification, tendon condition, etc.) and interfere with the effortless gliding of the structures. As a result of this constriction, the soft tissues become pinched and chronically irritated due to movement, which can cause inflammation of the bursa (bursitis), and in the worst cases, even tendon ruptures. If you put on thick ski socks, for example, and slip into tight shoes, you can get blisters or irritation after a specific time. It is similar to the bursa when it is chronically pinched.

Many people with impingement syndrome experience pain primarily in the lateral aspect of the shoulder and upper arm, which may radiate toward the elbow and forearm during overhead work and particular movements.

When making an inward and backward rotational movement, for example, if trying to reach back from the driver’s seat in a car, it may stop or jam. There is usually no restriction of muscle strength. If the arm is laterally abducted, movement restrictions and significant pain in the range of 60° to 120° may become noticeable, associated with rubbing sensations and noises. Movement below 60° and beyond 120° is usually no longer painful.

X-rays are used to examine the morphology and anatomy of the acromion. Here it can be determined what ‘type’ of the scapula (straight, curved, hooked). At this point, it is essential to mention that the CSA (critical shoulder angle), a value that can be measured on x-ray, provides information about how large the angle between the glenoid cavity and the acromion is. This angle can indicate whether impingement and, among other things, rotator cuff tears are predisposed. Another angle is called the GTA (Greater Tuberosity Angle), which measures the humeral head’s widening.

Since this is a soft tissue problem, an ultrasound provides clarity on the symptoms. As a clear sign of bursitis, an accumulation of fluid in the subacromial space can be seen on ultrasound. There is also a bursa (bursa sac) under the deltoid muscle, visible on ultrasound. Often a dynamic examination is performed during an ultrasound, i.e., the patient is asked to move the arm. Here, one can directly see if there is soft tissue entrapment and exactly where the problem is. Increased fluid accumulation (bursitis) can also be detected on MRI.

As a non-surgical measure, NSAIDs (non-steroidal anti-inflammatory drugs) can be administered as an initial treatment. These drugs are used to relieve pain and act as anti-inflammatories. They can be taken in high doses for 10 to 14 days to break the vicious circle since inflammation can usually result in swelling and thus further narrowing.

If treatment with NSAIDs has no effect, cortisone injections can be administered to the affected area. Accompanying medical treatment, physiotherapy can be initiated. Joint-centering exercises are commonly set interventions. Joint-centering movements try to keep the humeral head in place without moving up and ‘hitting’ the acromion.

If neither medication nor physical therapy is helpful, a minimally invasive procedure using arthroscopy should be considered. During the process, the bursa and inflamed tissue are removed, and the part of the acromion that is partly responsible for the impingement is abraded (acromioplasty). This increases the space and prevents the bone parts from ‘hitting’ against each other. 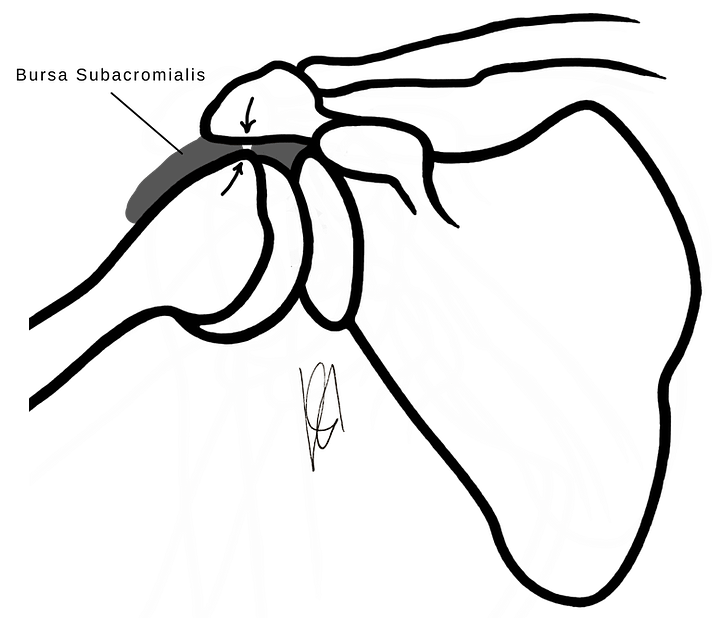 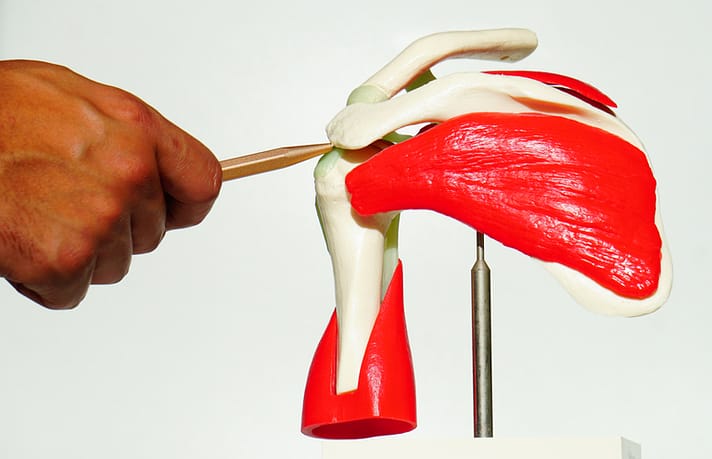